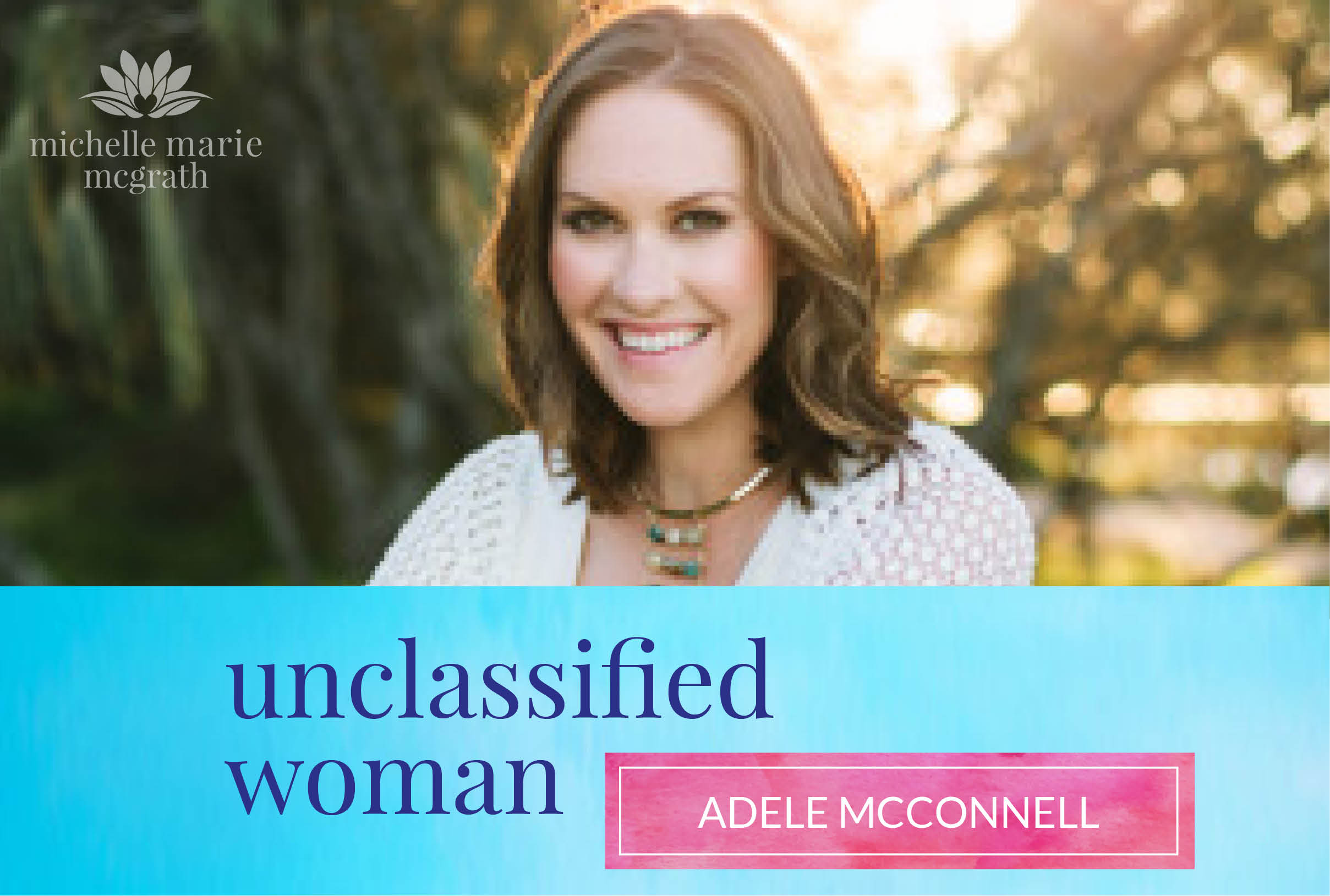 I’m delighted to share this episode with a lovely friend, Adele McConnell of Vegiehead.

Adele is a published and best selling digital author, owner of vegiehead.com and the Vegie Head Academy and she also writes the national magazines. She’s appeared on the cover of health magazines across the world and lives near the beach on the sunshine coast in Australia. Adele is a recipe evolutionist for people who want to enjoy more plant-based recipes in their diet. She creates food with integrity and encourages others to live a powerful life with powerful plant-based food. Her site “Vegie Head” is a place where saucy, tempting, recipes live and Adele’s inspiring words touch hearts. Adele’s first published cookbook was released worldwide in March 2014 and has been reprinted three times and is now available in three languages. For more about Adele’s work including Vegie Head’s VIP Clubhouse see here.

Adele believes that not having a child was a combination of circumstance and a personal choice. In 2010, she had an ectopic pregnancy. She was 10-11 weeks into the pregnancy when it was discovered. It was a shock as she had not known that she was pregnant at the time. She went to the doctor several times and yet they couldn’t find anything wrong. Later, she was rushed to the hospital and went under emergency surgery. This was a scary experience for Adele and looking back she realised that she wasn’t listening to her body. She does not want to take the risk of experiencing another ectopic pregnancy or going through the process of having a child.

Adele has always been the type of person who was not particularly interested in having children of her own. She has a 3-year old niece that she absolutely adores. She says she’d rather be a cool auntie rather than a mother. The thing that bothered her most about the ectopic pregnancy was:

The pregnancy was unexpected.
The fact that she was undergoing such serious surgery that she had no control over.

Inspirational aunt: Adele’s aunt (now 60 years old) had her tubes tied at 18 because she also had an ectopic pregnancy and was not interested in having children. Adele has spoken to her about this multiple times and her aunt said that she’s only met a couple of people in her life who can whole-heartedly say that it’s a decision they made consciously. Adele says she was an awesome aunt and was always active in her life. Adele sees herself in more of a similar role.

Not every woman is a natural mother or should be a parent.  Many women don’t have a biological urge to have children, whereas some feel that drive very strongly. If you know that it’s not your path, then it’s important to listen to yourself and follow that. Also, to respect people who say that that’s not their choice. Adele experienced people questioning her and making her feel that she didn’t make the right decision. There has to be respect for women who make the conscious and unconscious decision not to have children. Adele has had that forced upon her, even coming from her husband’s family members asking, “So when are you and Paul going to have kids?” It’s not the right thing to ask, especially if they are going through a difficult time.

Were there any challenging situations, beliefs, or questions that came up? Did it send you to a period of self-inquiry?  Adele really felt like the whole ectopic experience was her fault. She was in agony and in the hospital had hot water bottles on her shoulders and an ice pack on her stomach for the inflammation. She turned to her husband Paul and cried in pain and fear. She felt like she manifested it and that it was her responsibility for what happened. She did a lot of self-inquiry and has taken her a long time to be able to talk about it freely. It’s about being honest with yourself, listening to your body, and to your instincts.

It’s one of those subjects where we don’t give ourselves enough credit and listen to ourselves. In Adele’s life, she doesn’t think that having biological children is for her. However, she and her husband are open to fostering and adopting. There are so many children out there that need homes and loving parents and Adele doesn’t believe that love or parenting has anything to do with biology.  You don’t need to give birth to someone to be their mother or that you don’t necessarily have to be a biological mother to give them the motherly love that they want.

We are extending that feminine, mothering, caring, loving energy in so many ways in different parts of our lives. It’s up to each individual to see which way is most fulfilling and rewarding for them. Adele shares that kind of relationship with her pets. It’s an example of having a loving bond and in return they give us that unconditional love. Adele calls her dogs her babies and treats them like humans. She’s grateful that she can experience that and have that bond like how she would with her own children. They need that same love, care, and stimulation that a child would need. She compares taking care of her dogs to parents taking care of their children. Having a dog is great if you are practicing to be a parent and do require a lot of hard work. This is one way that Adele shows her nurturing, caring nature.

Adele believes that if we have a loving relationship with food then we can eat it lovingly and feel good about it as oppose to having these confusing and disparaging relationships with food. When we are eating good food and fueling our bodies, we’re saying to our bodies that we love them and that we are mothering and nurturing our bodies in a way. For her, working with women, connecting with people and making sure that her cubby is full allows her to do it for other people as well. It’s mothering yourself and treating yourself how you would treat a child and showing kindness. Adele models that through her relationship with food. She is also writing and educating about that and is creating a book about recipes for dogs. This goes back to nurturing someone else other than ourselves but at the same time, she is nurturing herself because cooking for her dogs gives her love and happiness to do that for them.

It can be a difficult and challenging process to foster and adopt children. There are so many children who would benefit from a loving home and there are many people who would love to have a child but may not be physically able to. Adele mentions that it will be interesting to see how the processes become easier over the years, so that it’s more accessible for suitable parents. Adele has seen neglected kids everywhere with parents who aren’t good influences. She had a girlfriend who was trying to adopt and suddenly lost her job. She couldn’t get another job in that industry and so was unable to adopt a child. It isn’t right that the process is so complicated, when at the same time people can easily have children and neglect them. Hopefully the process can become easier so that suitable and responsible parents can give children the loving homes they need.

What do you feel is your most important message? What would you like to leave as your legacy? Adele asks herself, “What can I do to change the lives of the people around me or the animals around me?” For her, it would come down to working closely with dogs whether it be leaving people with books or educating people about it or raising a charity. If we:

Connect to what we feel passionately about and believe in;
Be ourselves;
Give ourselves permission to share openly.

It can only be of positive benefit to others and yourself, because you are living and speaking the truth. We have to respect each woman’s path and not judge women based on the actions they take.

Adele loves her own space and loves doing things for herself and says that if she can’t give to herself, she can’t give everything she’s giving out to the world. 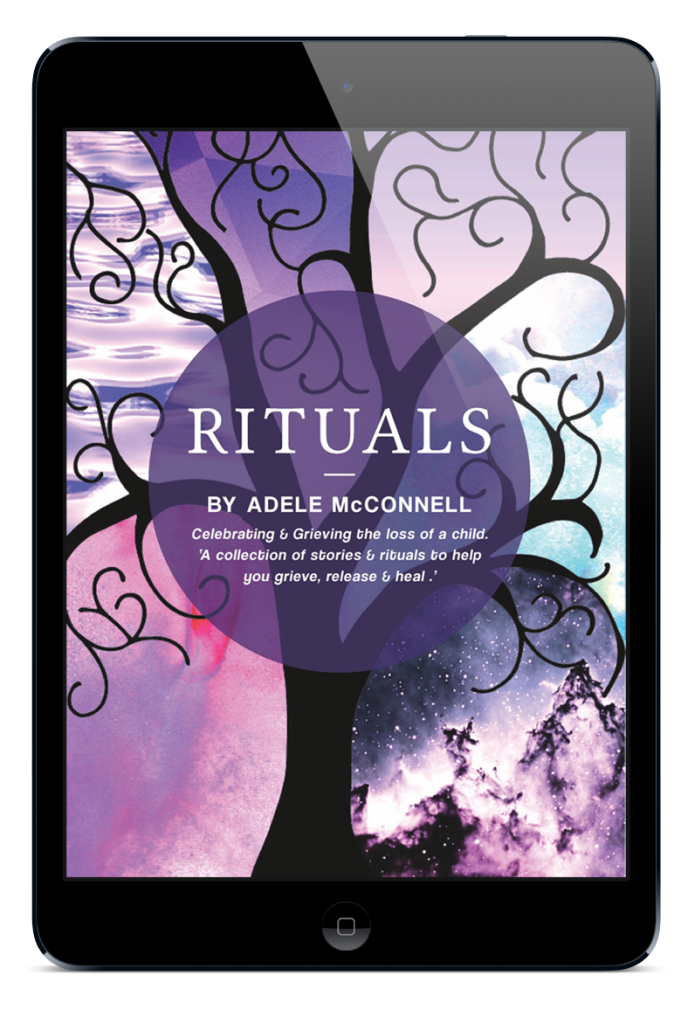 One of Adele’s wonderful projects is “Rituals”. I was delighted to contribute my personal experience of a molar pregnancy and also an aromatic bathing ritual.

This is about ‘celebrating and grieving the loss of a child. A collection of stories to help you grieve, release and heal’. There are some beautiful tools and resources in here and I highly recommend it for any woman who is looking for sacred rituals to assist in coming to terms with what has occurred. There are some very moving personal stories. You can find it here.

Find out more about Adele and her wonderful work at Vegiehead where she shares a wealth of information, recipes, and courses.