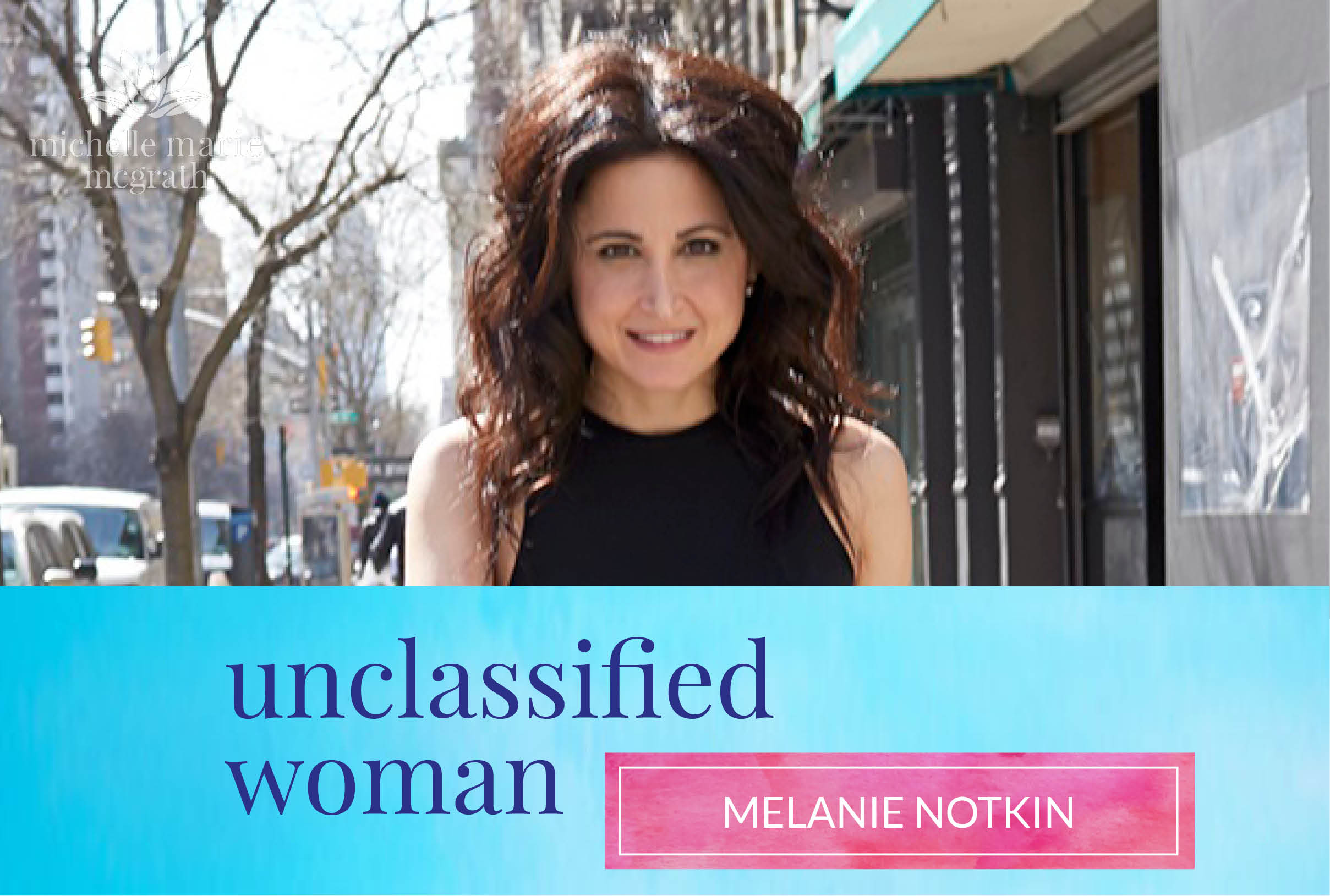 Melanie Notkin is a media entrepreneur, author, speaker, marketer, and a leading voice of childless, often single women.  She is the founder of the Savvy Auntie lifestyle brand and is also the national best selling author of the book, SAVVY AUNTIE: The Ultimate Guide for Cool Aunts, Great Aunts, Godmothers and All Women Who Love Kids and Otherhood: Modern Women Finding A New Kind of Happiness. You can find out more about Melanie’s work here.

Melanie believes that being childless for her was due to circumstance. She always wanted to find love, get married, and have a child with that man and yet she remained single. She is 46 and always expected to have found that love and would not settle for anything less. Unfortunately, whilst she hoped it would happen before her fertility waned, she has remained without a child.

What do you think are some of the reasons that women are facing?

“Social infertility” is an increasingly used term.  Melanie uses the term “circumstantial infertility,” the pain and grief over not having a child because you don’t have a partner and you would prefer to have a child with a partner.  It is a global Western trend and is a global phenomenon. There was a 15-page feature in DE Morgan, the largest daily in Brussels for Mother’s Day on “Otherhood”,  the title of her second book. “I think that part of it has to do with the fact that women today, our generation, the daughters of the feminist movement born in the 60s, 70s, 80s, imagine we’d have the social, economic, and political equality our mothers didn’t have when they were born. Naturally we’d have the husbands and kids that they did have. Plus the education and the financial stability, and independence, alas many of us had not been able to find that love.” Melanie thinks it’s partly because of the even split in education and in financial strength and ability.

This generation of single women are among the most well educated, most financially successful, often the most fit and fabulous. These are the most A+ women who can’t find a match.  It’s not because they are too picky, it’s that they want to have a partner who challenges and supports them and to feel that the person adds value to their life and family. Also, on the women’s side, we’ve been told, believed, and in some ways agree that in order to be equal to men, we have to become a little more like men. Women have lost our femininity and trying to shoulder a lot of the traditional roles that men often participated in. Melanie thinks that we are all a little confused about how we should act and truthfully feels that we get turned on by courtship. It seems that there is work to do on both sides to try to bring that together in a more balanced way.  She believes that the simple solution is honesty. Melanie learned to only agree to dates that only work for her. This means that she would make the man work and choose the place of venue rather that her making the decision.

How did Savvy Auntie come about?

Savvy Auntie came about before Otherhood. Melanie had the idea in 2007 and she launched it in the summer of 2008. She was in her late 30s and always expected to be married and have kids by then. The most important people in her life were her nephews and nieces. She didn’t know what to do, what they were in to, and all the things parents were talking about. Often, women who don’t have children can feel left out because they are spending a big part of their life without kids. Melanie then got the idea that there needed to be a community just for them, which is how Savvy Auntie was born. She was a marketer by trade so she knew there was a business in that.

What do you typically do on that day and what do you do to celebrate that day? How does that work? Just like Mother’s Day, it’s a day to celebrate and honor the aunt or godmother in a child’s life. It’s up to the families how they want to celebrate that day but it could is simply be a Skype call to communicate or with a card or a hug. It’s a way to acknowledge how much you love and care about them and how much they mean to you.

What is your definition of “childfull” and how did that word come about?  Melanie struggled with the words “childless” and “childfree”. Childless is the generic term for a woman or man who doesn’t have children. It has the word “less” in it and nobody wants to feel less than. Childfree is the implication of one that is free from children. Melanie does not feel childfree because she has children in her life. “Childfull” means that one’s life is full of children they love. This sounds very positive and most women who don’t have a child of their own but have a child in their life would agree to that term.

Melanie titled her book Otherhood because it’s not motherhood. Feminists talked about the idea of women being second to man, that women are other to man, and that equality would mean that we are no longer other to man. Childless women often feel other to mother. Melanie thinks that our next stage of liberation and feeling equal of our own equality movement is to show that we are equal to mother and that we are not other to mother. It is a good way to show we are fighting for that sense of equality.

There was a study done in Australia that showed how even among self-assured, confident, successful women, the feeling of otherness can make a woman feel less than. It’s interesting how people now choose the natural period in a woman’s life when to have children. People often make stereotypes that can be damaging and are not valid at all. It can be a lot of pressure on a woman who’s not necessarily responsible for her circumstances.

Melanie thinks that one of the stereotypes are called “career woman.” If you are single at 40 and don’t have children, most people will identify you as a career woman meaning that you care more about your career than a family which can be completely incorrect. Melanie talks about women freezing their eggs in their mid to late 30s even 40+ in order to have children once they find a man. It’s quite an expensive process that women are doing. Two major companies, Apple and Facebook, said that they would fund up to $20,000 for women to freeze their eggs, which is an extraordinary gift.

Melanie calls it “The Dating Bermuda Triangle” where women are between the ages of 35 to 40 and men often think that the women are desperate for children. The truth is that she could be feeling desperate and can be a challenging and tough time for her. One should know that this whole process reverses itself. Once the woman is in her 40s, all of a sudden a man who is in his 40s or 50s, starts to wonder why isn’t that woman desperate for me and he becomes more desperate for the woman who was once the confident one. However the woman of the “otherhood” will never settle for lesser love because if they were to have done that, it would have been at age 22 when their eggs were much fresher.

What do you think is the way forward and how do you think we can address this? Are there more women than men in that age group? Melanie thinks that it can be very helpful to be more honest.

There are so many women leading fulfilled lives creating things for themselves when they come to a point where:

They either didn’t choose to have children by choice.

It just did not happened due to circumstance.

“Babies are born from the womb, maternity is born form the soul, and there are many ways to mother.”

Melanie states that this was not the life she expected but it is in many ways a life beyond her expectations. She is doing things she never expected to do. People have asked her if she had any regrets. Her response is no but beyond that, the way she looks at life is, “Regret is behind me and my love and my life is ahead of me and if I’m back there in regret, I’ll never meet him and I’ll never life the life I was meant to live.”

The only advice she gives to “otherhood” is to the reader to turn the page and start her next chapter. She wants everybody to move forward. What happens to many of us is that we get stuck. Many of us live on this “borderline regret.” “Do I choose A or B?”  Melanie wants every listener to make a choice and once you’ve done that, you’ll be free and you’ll be living the authentic life you’re meant to live.

Be honest with yourself/ Have honest conversations with others.

Don’t live in that regret and try not to be stuck in that grief.

As children, we’d imagine and dream what our future would be like. We do that today as adults and we don’t let go of what our imagination had decided our life to be. Whoever is feeling stuck and that their life isn’t the way they want, write down 10 things that you appreciate abut yourself and the accomplishments you’ve made. Then you’ll realize all of the things you actually have rather than what’s missing.

Who would you say are your most inspirational role models of women?

Diane Von Furstenberg – her mother is a Holocaust survivor.

No matter how you feel, there are women like Diane who are born out of the ashes. Sometimes it takes those low moments to realize that change is about to happen. What would you like to leave the world as your legacy? “Move forward and keep going.”

You can find out more about Melanie’s work here.