The end: this is the beginning 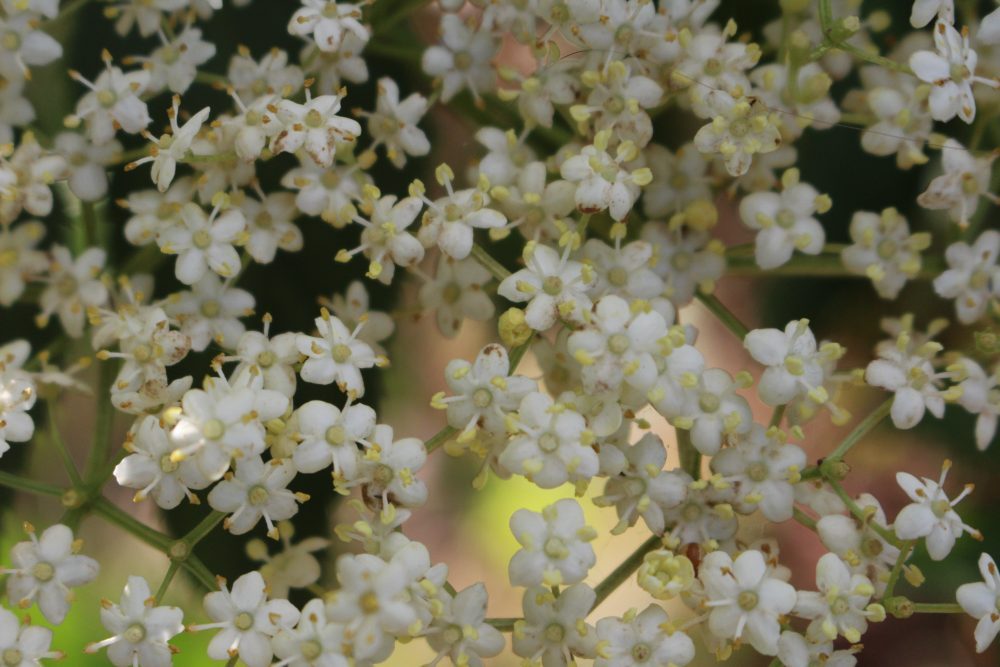 Since the beginning of April 2020, each time I strolled around Rosemere I found myself continually noticing an Elder tree and had the sense it was trying to attract my attention. Yes really.

There are two small elder trees which lean together and form a natural archway. Often I find myself drawn to stand between them and pause for a while. Early one perfect Spring morning in the first half of May, I was walking slowly through overgrown high grasses and ferns and was instinctively guided through some bushes. When I pushed my way through, I was surprised to come across a couple more elder trees that I hadn’t noticed before. As I listened to the birds and moved into a meditative state I heard the voice of the Elder spirit ‘you’re going to be working very closely with me. It’s time.’ I was so taken aback and the voice continued ‘I am the end. I am the end. I am the lady of death.’ Well as you can imagine this kind of jolly talk threw me and I was shocked and then rather alarmed. My initial response was ‘wtf?!’  ‘I am the end so that also means I’m the beginning.‘ Okay then. I then walked into towards the boundary fence in one corner and came across another one – right on the Michael leyline. 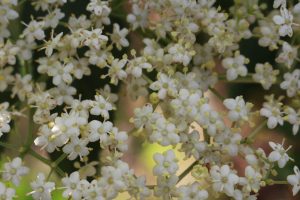 I had the sense the Elder tree is sacred to the Fae folk but didn’t know much more.  And then I sat down next to one of them I was instructed that I would co-create an elderflower essence soon, elderflower cordial and then later in the year also make a tincture with the elderberries.

I was surprised by this unexpected communication and was told ‘you’ll make the essence at the next full moon.’ There was a resonance with the number 13 – which is often deemed unlucky in this patriarchal system when in fact it’s also the Goddess’ number and very powerful. So that was fascinating.

What I didn’t realise until a couple of days before I made the essence was that it would also be the lunar eclipse. What I would notice is a period of karmic completion – not only within myself – but globally. Many old patterns would be purged and systems would be demolished. (This is more fascinating when we see what’s going on in the world in terms of social justice – all long overdue). A new chapter will open up from Spring 2021 (March/April) and until then the more we can transform old patterning and release, the better – for ourselves and those around us.

So as instructed I meditated and sat with the essence as guided and learnt I was to start taking on 13th June to prepare and hold the space for those who worked with it afterwards (which I have been). I would be taking this for a 5 month journey. For others this would be taken for 5 weeks, 5 drops each day. As I sat in meditation I was conscious of the rising sun on one side of me and the descending moon. I could feel myself being balanced in the middle of the two.

The weather was so changeable and as I heard ‘A balancing of the solar and lunar aspects within (the masculine & feminine). Flashes of brilliance will arise and then you will will dive back into darkness to reflect again. What is unconscious will be brought into your conscious awareness. There will be distractions (like the clouds moving in front of the sun), there will be niggles to pull your attention away from what you are realising (like the wind rising suddenly to whip your hair in your eyes so you can’t see). Then you will take a deep breath, bring your focus back to your centre and what is revealing itself in your conscious awareness.’ 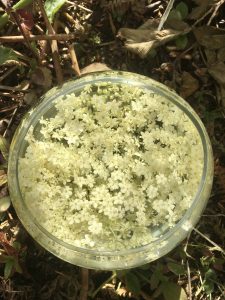 The old bitter wind will blow,

You’ll be whipped by the freezing rain.

And the sun will warm your skin again.

The light and the dark,

All the shades in-between.

A bloody mess is inescapable,

As you birth a new dream.

As the shifts are integrated a new level of maturity will be revealed and a deeper emotional self-awareness as you make more conscious choices.

I also received the words for an audio activation which will remain sacredand not shared elsewhere except for those who embark upon this journey with elder. I was informed of a musical note frequency that this resonates with, which again was a surprise.  As the essence creation came to a close I was very drawn to the five petals and the star formation which then made sense of the five drops each day for five weeks. I used flowers from each of the five elder trees. The star is also the symbol of the integration of the higher and lower selves coming into embodied union.

This is also only for those who are aged 33+ as it resonates deeply with the crone/wise woman archetype.

Elderflower essence is a companion with Completion Alchemical oil – first received on 5/6/2012-6/6/12 – exactly 8 years to the day that Elderflower Essence was created – I didn’t actually realise this until only a few days ago. As you can imagine, my jaw was on the ground. The universe is very funny with its cycles and seasons. Oh this spiral pathway 🙂

So this is the first of the Rosemere Essences. I was shown another one that will be created in Spring 2021. I was not expecting any of this to occur this year – but then let’s be honest who could have foreseen what 2020 has brought so far? 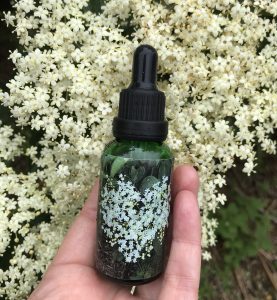 So I honour and acknowledge the blessings of Elderflower with her unexpected insights. I’ve already had some surprising realisations this week and been able to integrate some distorted patterning that I had been unaware of for the past 13 years, in conjunction with Completion Alchemical oil. I look forward to hearing what she brings to you.